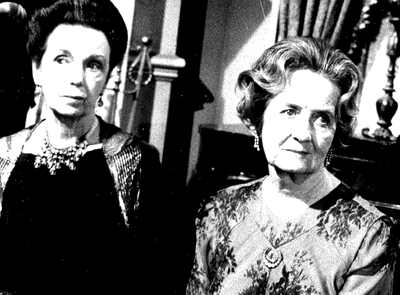 She was visiting New York City. It was late as she entered the crowded bus and there was standing room only. From the back of the bus she noticed two young men looking her way and whispering. One of them winked at her and she suddenly became apprehensive. As one of the young men approached, she tightly clutched the bus rail and expected the worst. Much to her surprise, the man offered her his seat. She accepted the kind offer, and as she was sitting down, he leaned over and asked her gently; “I only want to know one thing....did Ashley ever come back?” That was a poignant moment in the memory of Mary Jackson and her sense of “The Waltons” and its impact on the American conscience.

I was seated in a lovely sun-lit room in the Spanish style Hollywood home of Mary Jackson. She had kindly consented to meet with me and share some of her reflections on “The Waltons.” As we chatted, I couldn’t help but notice her genuine beauty. She exuded that particular quality of naturally beautiful women. As we spoke, I caught myself thinking about Miss Emily Baldwin of Jefferson County, Virginia, one half of the famous Baldwin sisters created by Earl Hamner.

As explained by Earl Hamner: “Down on Route 6 between Esmont and Scottsville lived two ladies who made an elixir they referred to as their Papa’s Recipe. They were proud of their product, and whenever anyone would sample it, they would lean over, watch them and wait anxiously for a reaction: Was it smooth enough?, Had it been a good batch? And was the recipe machine working? I wasn’t old enough to sample the Recipe but my father and uncles stopped there quite often and they seemed to find the Recipe much to their satisfaction.” It was from those personal recollections that Earl Hamner created the characters of Miss Mamie and Miss Emily Baldwin.

Mary Jackson grew up in Michigan during the early Depression years. She attended the county Normal School which was a training school for prospective teachers in rural communities. She graduated at age 17. During her first year in the classroom, she recalled, she had three students older than she was. Her teaching career lasted but one year, when she decided to attend Michigan State University to study acting. She graduated in 1933 and went to Chicago to begin her acting career.

Almost 40 years later she would capture the hearts of America by her portrayal of Emily Baldwin. “‘The Waltons’ was a real joy and a magnificent tribute to Earl Hamner. Earl gave me two things, don’t you know, that I will always cherish and be thankful for: Helen Kleeb (Miss Mamie) as my older sister and the TV series ‘The Waltons’......and he gave me Ashley Longworth. I think you ought to know that Ashley has never come back. In case you see him out there, please tell him to return. I have some of the Recipe waiting”, she said with a smile and a wink.

You can catch Mary on The Family Channel reruns of “Christy”, where she guest starred. She also had an interesting role in “Leap of Faith” with Steve Martin. Fans of “The Andy Griffith Show” will also remember Mary as Mrs. Parnell Rigsby and “Twilight Zone” affectionadoes can see Mary in the Episode called, “Of Late I Think of Cliffordville” written by Rod Serling.

Helen Kleeb also appeared on an episode of “The Twilight Zone” called “Jess-Belle.” That particular episode was written by Earl Hamner, who would ultimately write eight stories for the series. Helen was born in 1907 and says that she is fragile. “I know I am fragile because everyone is constantly telling me so. They also frequently warn me not to fall down.” This venerable actress began her career in 1928 in Portland, Oregon. For five years she worked with the Henry Duffy Players on the West Coast. Then the Depression hit with a vengeance and she couldn’t get stage work, so in 1933 she began to work in radio in Portland. In 1937 she was married in San Francisco and remained there working in radio until the death of her husband in 1950. Faced with the full responsibilities of running a home and raising a 10 year old son, she moved to Los Angeles where she began a film and TV career.

In 1972, she read for the part of Miss Mamie Baldwin and began a wonderful career as part of “The Waltons” family. Helen can also be seen in reruns of “The Andy Griffith Show” as Mrs. Morgan, “Dragnet”, “Lou Grant” and the feature film, “The Manchurian Candidate”, with Frank Sinatra.

It was Miss Mamie and Miss Emily who demonstrated that gentility and graciousness abided on Walton’s Mountain. The past flowing into the present. The present blending with yesterday. What wonderfully special people, both in the series and in real life.

These two fine ladies continue to live in Los Angeles and would love to hear from you. Write them in care of the Museum and your letters will be forwarded.

©1998 Blue Ridge Publications. This Web site was designed by the editor of The Blue Ridge Chronicles.