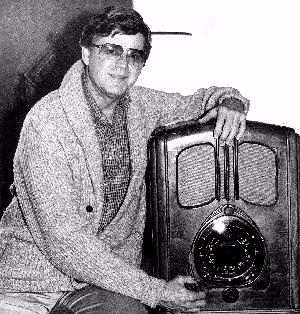 A sign on the door of Earl Hamner's office reads: "work is for people who don't know how to fish," so if there is no answering knock it is probable that Earl is trolling for salmon in British Columbia, fly casting for bone fish in Florida or gone to Baja in search of marlin.

While he has caught the Canadian salmon, the Florida bone fish and the Mexican marlin, the writer's happiest fishing grounds are on the Rockfish River in his home town of Schuyler, Virginia where he first learned to fish with his father during the Great Depression of the 1930's.

Hamner was born in Schuyler in 1923. The village has since been the fountainhead of much of his literary work and has become a Mecca for fans of his books and television work from all over the world.The oldest of eight red headed children, born to Doris Gianinni Hamner and Earl Hamner Sr., Earl began writing when he was six. He wrote a poem about a wagon full of puppies which he carted about in a little red wagon. Since he had neither puppies nor a little red wagon at the time, his first effort at creativity caused his father some anxiety. Nevertheless, the poem was published on the children's page of The Richmond Times Dispatch and Earl was hooked on a writing career.

Upon graduation from Schuyler High School, Hamner entered the University of Richmond on a scholarship. He was drafted into the United States Army in 1943 and received training in the demolition of land mines. On the battlefield, such an occupation has a life expectancy of thirty to forty seconds for the demolisher as well as those around him. Fortunately, the Army reconsidered and assigned Earl to a Quartermaster Corps unit in Paris where he served without demolishing himself or any of his fellow soldiers. While Earl never became a boulevardier he did learn how to get from Opera to Auberville on the Metro and how to order ouefs et jambon in a French restaurant.

Upon his return to as civilian life Hamner worked at radio station WMBG in Richmond. He furthered his education at Northwestern University and graduated from the University of Cincinnati.

While working as a radio writer at the National Broadcasting Company in New York, Earl published his first novel, "FIFTY ROADS TO TOWN." Other novels followed such as "YOU CANT' GET THERE FROM HERE," and the best seller "SPENCER'S MOUNTAIN" which was made into a Warner Brothers film starring Henry Fonda and Maureen O'Hara. Earl also wrote the novel "YOU CAN'T GET THERE FROM HERE" which was optioned by Broadway's Richard Rogers. Rogers was working on the musical version of the novel at the time of his death. Hamner's novella "THE HOMECOMING" became the basis for the beloved CBS Christmas special starring Richard Thomas, Patricia Neal and Edgar Bergen.

Hamner worked in live television during its Golden Age, and when the industry moved from New York to Hollywood, Hamner moved there too in 1961. He wrote episodes for many of the major freelance markets including THE TWILIGHT ZONE, and CBS PLAYHOUSE. He also became active in feature films and was selected by E. B., White to write the film adaptation of "CHARLOTTE'S WEB." Earl's other film credits include "WHERE THE LILLIES BLOOM" and "PALM SPRINGS WEEKEND."

In 1970 the distinguished Virginian was asked by Lorimar Productions to write a television special based on his novel "THE HOMECOMING." The overwhelming critical and audience response to the special led to the series "THE WALTONS" which had a spectacular run of eight years on CBS followed by a year of special programs on NBC. These many years later the series is still being rerun on The Family Channel where it is their top rated show.

In a total change of pace from gentle family fare Hamner wrote and produced the pilot for FALCON CREST, a study of a rich and ruthless family of vintners in California's Napa Valley. With Jane Wyman starring, the series enjoyed a successful run of eight years on CBS.

For his writing Hamner has been honored by the Television Academy with an Emmy. He has also received the Peabody Award for Distinguished Journalism, The Man of the Year Award from the State of Virginia, the Man of the Year Award of the Broadcast Industry by the SPATE Convention. He has received Honorary Doctorates from the University of Richmond, Berea College, Morris Harvey College, DePaul University in Chicago and Loyola University of New Orleans.

Hamner lives in Los Angeles and Laguna Beach, California with his wife, Jane. They have two children, Scott and Caroline (Carrie).

Return to the Hamner Family Page